The Music and Poetry of Come, Ye Thankful People, Come (1844): A Sung Prayer of the Christian Tradition 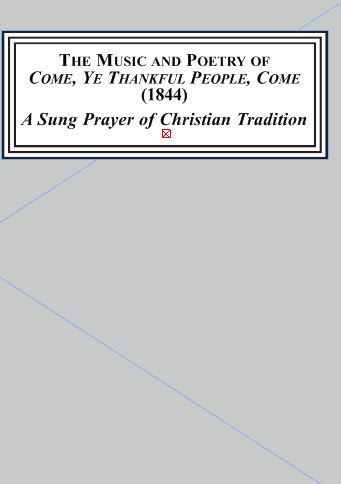 Although “Come, ye thankful people, come” (1844), by Henry Alford (1810-1871), as set to the tune “St. George’s, Windsor” (1858), by George Job Elvey (1816-1893), remains among the most popular congregational hymns in both Great Britain and the United States, negative criticism of Alford’s overall hymnodic production has diminished severely his reputation as poet and hymnodist. To assist students and scholars of Victorian hymnody in understanding the success of one and the failings of the other, this monograph looks into the life and the work of Alfred, especially as it applies to congregational song and worship; examines the music and the language of “Come, ye thankful people, come”; and calls attention to specific remarks issued by critical commentators.. The answers might well lie in the realization that faith alone does not always produce quality poetry.

As indicated above, Henry Alford first published “Come, ye thankful people, come” in the fifth of his lengthy list of verse collections, the two-volume Psalms and Hymns Adapted for the Sundays and Holidays throughout the Year (London: Rivington, 1844), no. 116. More than two decades later, he revised the piece, extending it to seven stanzas of eight lines each, inserting it into his Poetical Works (1865) and again two years later, into his Year of Praise (London: A. Strahan, 1867). Alford had composed the hymn as a form of liturgical message for his congregation at the vicarage of the farm village of Wymeswold, approximately five miles northeast of Loughborough, in northern Leicestershire, where he served from 1835 to 1853. Specifically, he intended the piece as an integral part of the thanksgiving celebration of the English Harvest Day.
From the Introduction to the Hymn

2. Introduction to the Hymn

3. The Text as Poetry

4. The Text as Congregational Hymnody, in Hymn Book and Hymnal

7. The Hymn Tunes and Their Composers