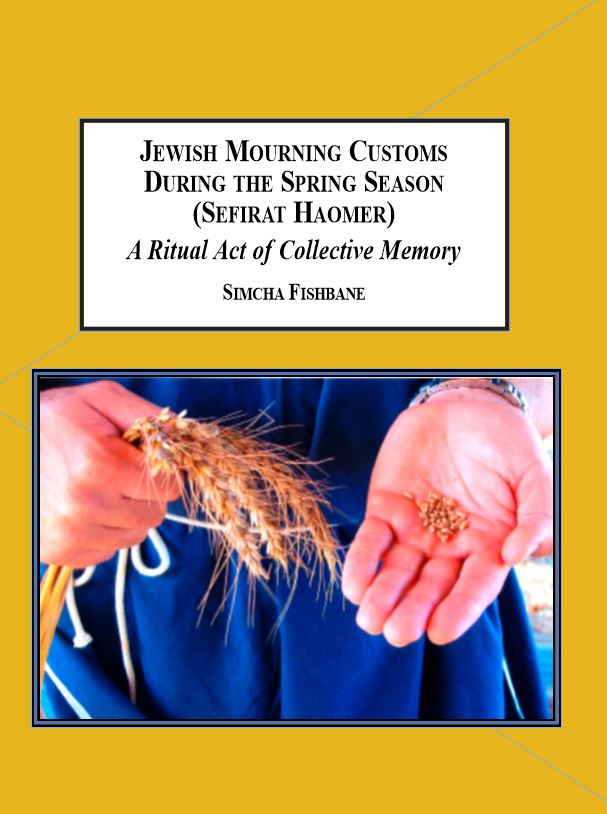 Dr. Fishbane’s monograph seeks to employ social scientific theory to understand the significance and evolution of Jewish mourning customs practiced between Passover (Pesach) and the Feast of Weeks (Shavuot) holidays.

"Most researchers, scholars and rabbis are in agreement that these twenty-four thousand students of Rabbi Akiva were in reality soldiers of Bar Kochva, who participated in the revolt against the Romans; this was the last attempt to restore Jerusalem Temple society and Jewish sovereignty. … Furthermore Rabbi Akiva was known to be a strong supporter of Bar Kochva and even believed him to be the Messiah. It is no surprise then, that he would instruct his students to join forces in revolt against the Romans. … The obvious question then, is why the editors of the Talmud pre-ferred to present the Rabbi Akiva tragedy and ignore the Bar Kochva story?"

The Theoretical Framework of Collective Memory

The Talmud as History

The Rabbis of Late Antiquity

1998 - Theologies of War and Peace Among Jews, Christians, and Muslims
1983 - Lily Montagu and the Advancement of Liberal Judaism From Vision to Vocation
2014 - E. Lawrence Levy and Muscular Judaism, 1851-1932: Sport, Culture, and Assimilation in 19th-Century Britain
>> See all our Jewish Studies books

2022 - What is the Basis of a Rabbi's Authority? Three Case Studies: Rabbi Avraham Danzig; Rabbi Yirsrael Meir Hacohen, The Hafez Haim; Rabbi Yecheil Mechel HaLevi Epstein
2022 - Jewish Mourning Rites: A Sociological Study
2021 - Fire Symbolism in Jewish Law and Ritual
2019 - Women's Literacy in Eastern Europe During the 18th and Early 19th Centuries: The Case of Haye Adam
2018 - Prostitutes in the Talmud: A Social Anthropological Study
2018 - Menstruating Women and Menstrual Blood in the Mishnah: A Social Anthropological Study
2018 - Witches in the Talmud: A Social Anthrological Study
2017 - Why Jewish Women are not Permitted to Work on the Festival of Rosh Hodesh: An Anthropological Explanation
2017 - The Pilgrimage to the Temple and the Giving of the Torah: Rabbinical Interpretations of the Festival of Shavuot
2017 - The Slaughter of a Rooster at the Jewish Festival of Yom Kippur: An Explanation of the Ritual of Kapparot
2017 - The Meaning of the Jewish Festival of Purim: What Its Rituals and Customs Symbolize
2017 - The Rabbinic Discussion About Bat Mitzvah Celebrations: Girl Puberty Rites in Judaism