The Meaning of the Jewish Festival of Purim: What Its Rituals and Customs Symbolize 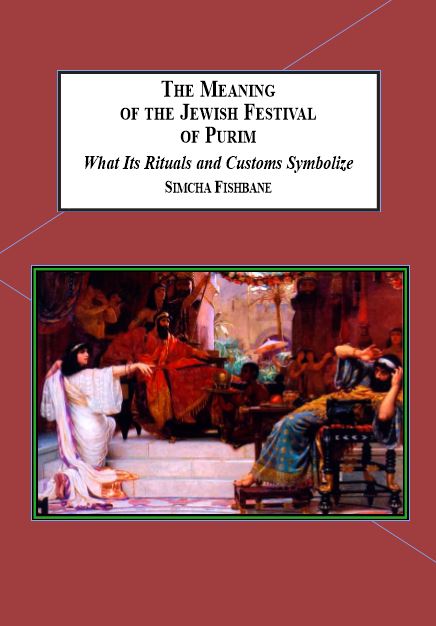 Dr. Fishbane’s monograph seeks to decode the implicit message encoded within some of the practices and customs of the holiday of Purim.

"Purim is a one-day festival celebrating the victory of the Jews over their enemies, as told in the Book of Esther. The story is set in Persia in the Fifth century B.C.E. Purim is rich, not only in rituals common to other Jewish festivals such as specific prayers, festive meals and public readings of a scroll (Megillah), but also includes reversals of normative and expected Jewish behaviors. These religious rituals which deviate from the established norms practiced only on
Purim, which I beg for interpretation and understanding."

In contrast to other Jewish Holidays

Reading the Scroll of Esther

Customs relating to the reading of the Megillah

Opposition to the custom

Presents to the Poor (Matanot Leavyonim)

Reasons for the ritual of Mishloach Mant

The Mitzvah of Simchah [Joyfulness]

1. Those who object to intoxication on Purim

2. Those who do not see the Practice as an obligation, but rather an advisable act (mitzvah bealma)

3. Those who require the practice of becoming inebriated on Purim

Damage and Theft on Purim

Rabbis Cited in this Work

2018 - Menstruating Women and Menstrual Blood in the Mishnah: A Social Anthropological Study
1997 - Evolving God in Jewish Process Theology
2001 - Popular Jewish Literature and Its Role in the Making of an Identity
>> See all our Jewish Studies books

2022 - What is the Basis of a Rabbi's Authority? Three Case Studies: Rabbi Avraham Danzig; Rabbi Yirsrael Meir Hacohen, The Hafez Haim; Rabbi Yecheil Mechel HaLevi Epstein
2022 - Jewish Mourning Rites: A Sociological Study
2021 - Fire Symbolism in Jewish Law and Ritual
2019 - Women's Literacy in Eastern Europe During the 18th and Early 19th Centuries: The Case of Haye Adam
2018 - Prostitutes in the Talmud: A Social Anthropological Study
2018 - Menstruating Women and Menstrual Blood in the Mishnah: A Social Anthropological Study
2018 - Witches in the Talmud: A Social Anthrological Study
2017 - Why Jewish Women are not Permitted to Work on the Festival of Rosh Hodesh: An Anthropological Explanation
2017 - Jewish Mourning Customs During the Spring Season (Sefirat Haomer): A Ritual Act of Collective Memory
2017 - The Pilgrimage to the Temple and the Giving of the Torah: Rabbinical Interpretations of the Festival of Shavuot
2017 - The Slaughter of a Rooster at the Jewish Festival of Yom Kippur: An Explanation of the Ritual of Kapparot
2017 - The Rabbinic Discussion About Bat Mitzvah Celebrations: Girl Puberty Rites in Judaism