Two Theoretical Studies in Viennese Psychoanalysis by Otto Weininger: Toward a Theory of Life and Eros and Psyche (1901-1902) 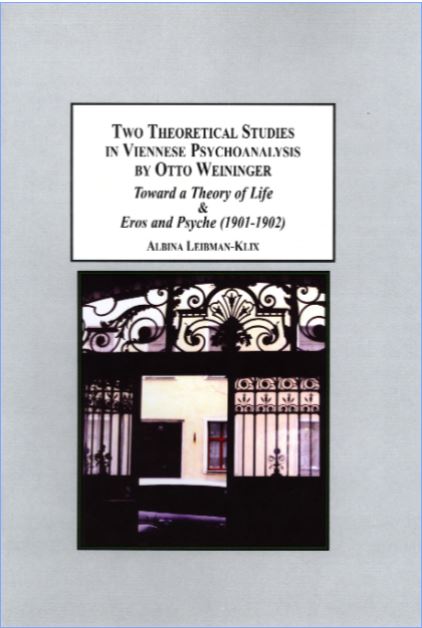 This work collects two early works by the Austrian philosopher Otto Weininger (1880-1903), Toward a Theory of Life and Eros and Psyche. This is first time these works have been published in English. Dr. Leibman-Klix describes Weininger's ideas concerning characterology, archetype and offers her perspective on Weininger's theory of gender, sexuality and language.

"Dr. Leibman-Klix provides new materials for the study of Weininger and his period, writings that so far remained inaccessible to an English language audience. For the understanding of the ideas and theories of the pre-World War One era, Weininger's writings and thoughts help illuminate what must seem strange and yet familiar to us today. Generations after Weininger have written, commented and critiqued what was right and what was wrong with his ideas, but maybe only now are students of Weininger's writings able to take him at who and what he was and study the Zeitgeist of an era that was in a fundamental process of transition." Dr. Frank Mecklenburg, Leo Baeck Institute

"Am intimate examination of Weininger's life, coupled with a close reading of his work may serve to illuminate and resolve his paradox. In he book Albina Leibman-Klix examines Weininger as a man and philosopher in the context of literature and psychoanalysis." Dr. Alexander Turin, Editor and Translator

Eros and Psyche. A Biological and Psychological Study. A Short Outline

Toward a Theoretical Biology and Psychology. (with one expression: Biography)

A Survey of Weininger's Life

Characterology as the Study of Microcosm inside Man

The Human Being and Animal

The Grotesque Creation of Nature

Metachemistry: The Molecular and the Molar