The Use of a Western Liturgical Rite by Eastern Orthodox Christians in Europe and North America: It Is the Holy Spirit Who Offers the Sacrifice 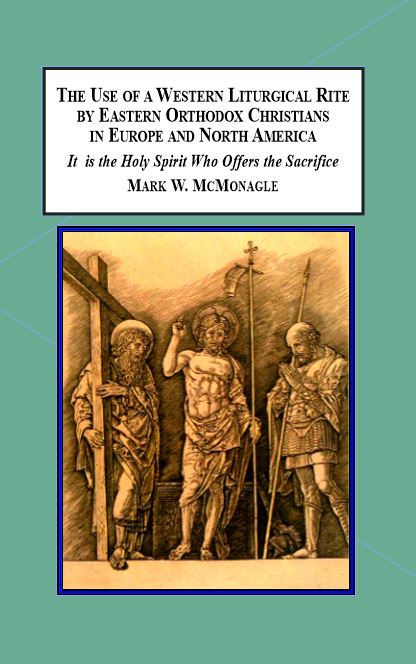 "First, Fr. Mc Monagle carefully engages a little-known aspect of liturgical studies. Only a handful of scholars have focused their attention on the use of Western rite liturgies among the Orthodox of North America. A second lasting contribution is McMonagle's fresh engagement of two perennial points of tension between the Eastern and Western streams of Christianity. While the one is creedal and other liturgical, both are of deep theological import. A third feature of his volume is McMonagle's richly nuanced attention to the role of the Holy Spirit in and through the liturgical rites and practices of the community of faith. The fourth contribution of this volume is its insistence on the liturgy as the church's primary form of theological expression." Dr. Douglas Cullen, Northeastern Seminary/Robert Wesleyan College

Chapter 1: A History of the Western Rite Initiative

Chapter 2: Theological and Historical bases for using the Western Rite Liturgy of St. Gregory the Great

Chapter 3: Heresy and the Liturgy

Appendix: The Mass of St. Gregory the Great as used by the Autonomous Orthodox Metropolia of the North and South America and the British Isles

2007 - Sophiology in Russian Orthodoxy
2009 - Role of the Russian Orthodox Church in Russia Since 1990: Changing Dynamics of Politics and Religion
2001 - AN EXAMINATION OF CHURCH-STATE RELATIONS IN THE BYZANTINE AND RUSSIAN EMPIRES WITH AN EMPHASIS ON IDEOLOGY AND MODELS OF INTERACTION
>> See all our Religion-Orthodox books