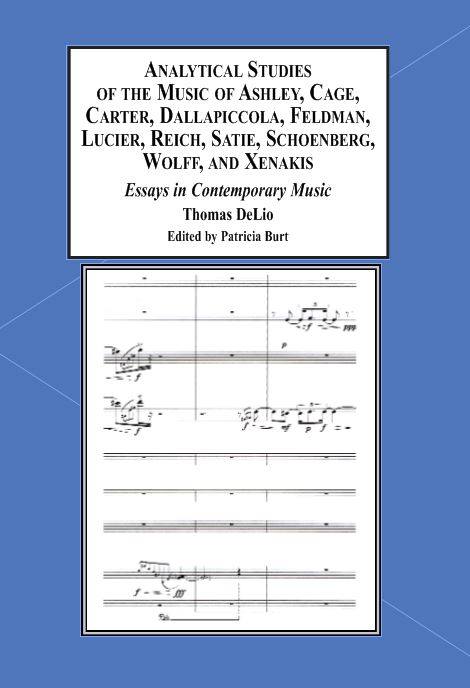 Over the past thirty years, Thomas DeLio, American composer and music theorist, has produced a highly original body of music and writings that have established his artistic and scholarly voice as unique amongst his peers. His writings have addressed music by a diverse collection of American and European composers including Iannis Xenakis, Morton Feldman, John Cage, Alvin Lucier, Arnold Schoenberg, Erik Satie and Luigi Dallapiccola.

"... Thomas DeLio's books and essays stand on their own , written by someone who is both an important composer and a highly regarded scholar. This significant body of work, written over the course of two decades and now finally available within a single book, informs us both about the subjects in a way that I find characteristic of of the best scholarship written by artist-intellectuals." Professor Christopher Shultis, University of New Mexico

"The writings of Thomas DeLio are extraordinary in their singular insight approach to music scholarship and criticism. His insights into what some would identify as 'difficult music' stem from intense engagement with both the works analyzed and the times in which the works were created. In this way, the analyses take into account the music itself as a reflection of the culture in which they where created, and the important connections between music and other arts and aesthetics." Professor Linda Dusmann, University of Maryland, Baltimore County

1 . The Morphology of a Global Structure: John Cage's Variations II (1980)

3. The Dialectics of Structure and Materials: Iannis Xenakis' Nomos Alpha (1980)

9. Structure As Behavior: Christian Wolff's For One, Two or Three People (1984)