Yezidis in Iraq: Between Citizenship and Policies of Marginalization (1958-2005) 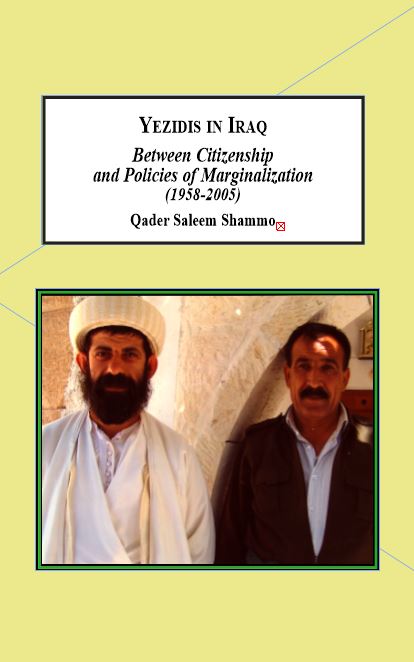 The histories of minorities in the young nation states of the Middle East is one of marginalization, oppression and bloody violence. In the case of the Yezidis, as well as the Armenians in the early twentieth century, there have been events when it is appropriate to use the term "genocide". Research regarding the Yezidis has been hampered by the lack of sources and/or access to official sources. Using original research, this book establishes that from 1958 through 2005, successive Iraqi governments marginalized Yezidis despite formally according them the status of Iraqi citizens. This book includes 13 color photos.

“The main purpose of this study is to analyse whether the Yezidi’s identity feeds more on the religious or cultural factors. Inevitably, the answer must be that both culture and religion add to the particular identity of this group. But more than these two elements are the long-lasting oppression and repeated disappointment that rights, readily promised by the Iraqi state, have often not been granted at the last moment. Based on these bitter experiences, it is understandable that there is no confidence/faith in any plan or activity of that state administration (whatsoever).”
Dr. Hans Peter Hahn,
Goethe University Frankfurt am Main

"Dr. Shammo has presented a highly detailed, committed and in a positive sense thoroughly original research project. The result is a considerable documentation and politically interesting work, which is scientifically of great importance and definitely developing new aspects. Part of its strength lies in the richness of detail and the evaluation of previously unrecognized sources."
Prof. Birgit Ammann,
University of Potsdam

Chapter Three: The Yezidis in the Iraqi State Until 1991

Chapter Four: Yezidi Position and Rights in Government Institutions and the Iraqi Constitution of 2005 (1991-2005)

Chapter Five: The Political Conflict over the Yezidis and Their Areas and Its Impact on Their Situations (1991-2005)

2017 - Who Are the Yezidis?: The History and Genocide of an Ancient People