Why Islam is a Danger to the World: A Scholarly Rebuttal of Muslim Propaganda (Softcover) 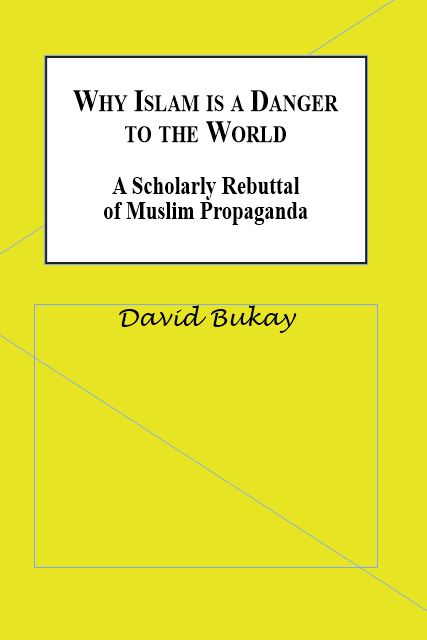 This research is about deception and propaganda. It deals with some issues where Muslims use Da'wah, a diplomacy of deceit and propaganda for western audiences. It is propaganda used to transform the west's thinking about Islam, its culture and beliefs. Dr. Bukay examines these issues to shed light on the Islam itself.

"What is exceptional and adds a richness of texture to the work, taken individually and as a whole, which may be classified as the oeuvre of David Bukay, is the dynamic of showing the Jewish, Christian and other endangered populations facing Islamic physical attacks and assault on their souls, why their position is so persecuted, so they can appreciate how deep in history and belief that persecutory and hostile political and ideological superiority and violence goes. This is no cheap sensationalist expose of behavior. It is a warning from history, a call for recognition of a reality from which decent minds may have shrunk in revulsion, in hope of an alternative and it is a call to face up to responsibility to recognize that flinching when evidence is a hand will allow the power of cruelty to be manifested broadly and without prepared defense."
Christopher CER Barder, MA, PGCE, JP

Chapter One: Islam and Science Expropriation: The Politics of Imprudence

Chapter Two: Islam and Islamophobia: Externalization of the Guilt

Chapter Four: Islam and Slavery: The Scourge of Humanity

Chapter Five: Islam and Tolerance: No Such Principle

2021 - Ten Reformist Movements Within Islam: al-Ghazali to Khomeini (Softcover)
2019 - Why Islam is a Danger to the World: A Scholarly Rebuttal of Muslim Propaganda (Hardcover)
2020 - Islam and Islamophobia: Externalization of Guilt (Softcover)
>> See all our Religion-Islam books