The Theology of the Ascension of Isaiah : A First New Synthesis 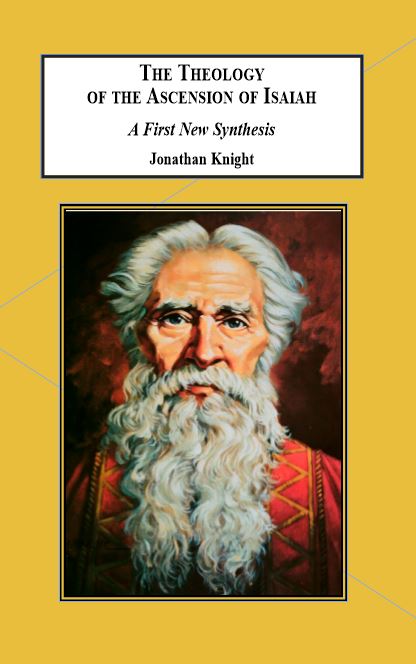 Dr. Knight contributes to the study of both the theology of the earliest Christian literature and the New Testament by examining the neglected early second century apocalypse known as The Ascension of Isaiah. The goal is to allow scholars to examine all the evidence that exists.

"Jonathan Knight's book, clearly and engagingly written from along engagement with an important but relatively neglected text that was nevertheless widely read in the second century, invites the student of the New Testament to radically revise conventional views about early Christian theology, and to realise that the canonized writings of the New Testament gives a fragmented, incomplete impression of the perception of Jesus as divine. This account also defines a strong relationship between emerging Christianity and a Jewish tradition, written perhaps in Antioch, that celebrated the notion of salvation through revealed knowledge."
Dr. Philip Davies,
Sheffield University

The Theology (and the sociology) of relevation

Setting in the history of early Christian theology

1987 - Modern Buddhist-Christian Dialogue: Two Universalistic Religions in Transformation
2009 - Elizabeth I’s Use of Virginity to Enhance Her Sovereignty: Managing the Image of a Sixteenth-Century Queen
2013 - WHY DO YOUNG PEOPLE DECIDE TO BECOME CHRISTIAN MINISTERS? Applying Psychological Type Theory to Understand the Choice of Vocation by Canadian Baptist Teenagers
>> See all our Religion-Christianity books