The Problem of Translating Catholic Doctrine into the Language of an Indigenous Horticultural Tribe: A Study of Jesuit Father Jean de Brebeuf's 1630 Catechism of the Wendat (Huron) People 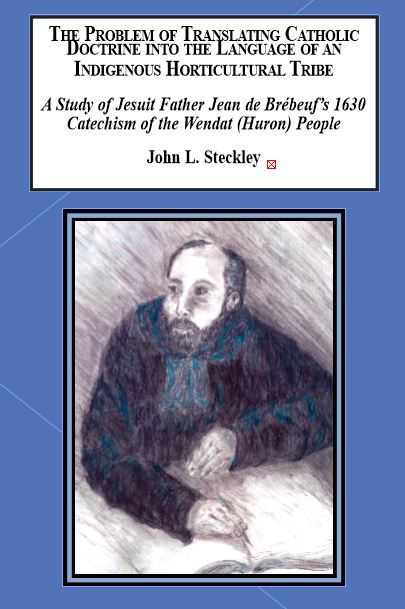 This work focuses on the first Catholic Catechism written by Jesuit Father Jean de Brebeuf in the Wendat (Huron) language. This work focuses on the translating successes, mistakes, and cultural challenges that went into the creation of this important piece of religious and cultural history. Dr. Steckley seeks to show how Jesuit missionaries introduced Catholicism to the Wendat tribes of New France.

"What Steckley does through this work is to provide nuanced insight into the challenges of translating complex concepts in Christian theology into the Wendat language. Steckley takes us beyond the general assessment of the fundamental differences between the two languages: that French was dominated by nouns; Wendat by verbs. He explains how and why translating Christian concepts such as grace, sin, hope, and charity were so extraordinarily difficult, and makes it clear even when such translations were possible, they rendered only part, in some cases only one small part of the concept into the Wendat language. ... In short, Steckley's critical edition of Brebuef's Lesdema Catechism is an important work." Dr. Heidi Bohacker, University of Toronto

"Steckley is able to unpack this 15-page Catholic catechism to explore seventeenth century life in Wendake. Steckley brings his readers through his methodological journey as he discusses the potential meanings behind words and teh hypothetical motivations behind Brebuef's translations. This is not only useful in understanding the quality of interpretations expressed in Steckley's work, but also serves as a model for other researchers to follow." Dr. Kathryn Labelle, University of Saskatchewan

Chapter Four: Translation and Analysis of the Text

2021 - THE WYANDOT LANGUAGE: Structure and Dictionary
2010 - The First French-Huron Dictionary by Father Jean De BrÉbeuf and His Jesuit Brethren
2007 - Huron-English / English-Huron Dictionary, with Special Attention to Verb and Noun Roots