The History of Scholarly Research into the Writings of J.D. Salinger (1986-2016): A Companion to the Annotated Bibliography 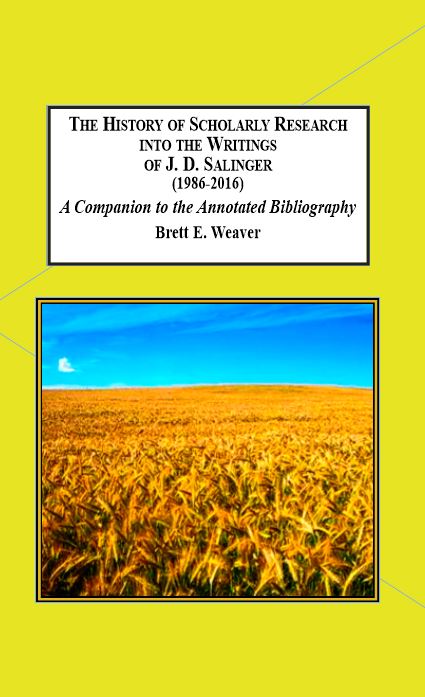 "Weavers bibliography will facilitate further scholarship, will enable voices - established and new - to keep talking the talk that continues to follow in the wake of all that Salinger has created. Scholars will owe a depth of gratitude to Brett Weaver. His work will enhance their own providing a base from which further readings of Salinger's work will be possible. The measure of Weaver's bibliography will be on the pages of books and journals for many years to come. This is as it should be, despite Salinger's own retreat from the literary scene. Scholarship is an informed and stimulating conversation among parties of similar interest. Brett Weaver has gathered the talkers so the talk itself can go on."
Dr. Lee Martin, The Ohio State University

"Weaver's study not only invites scholars to see Salinger in new literary-historical contexts, but also in an international frame. After reviewing this work, I have come away with a new sense of the trans-Atlantic and trans-Pacific significance of Salinger's work. In this way, this manuscript contributes to one of the most urgent tasks of twenty-first century American literary studies disrupting the parochial and nationalistic frames through which we too often evaluate US authors. Weaver's review of Salinger criticism reminds us that by widening out lens, we see both more and more clearly. Consequently, Weaver's study is both retrospective and anticipatory. It surveys the wealth and diversity of Salinger scholarship since 1982 and it does so in a manner that gestures toward the richness, freshness, and vitality of the studies that will surely emerge in the wake of the important publication."
Dr. Michael Sallet

2006 - Syntactic and Literary Analysis of Ancient Northwest Semitic Inscriptions
2018 - An Annotated Bibliography (1982-2016) of Works Published About J. D. Salinger
2016 - THE SCHOLARLY PROCESS OF EDITING LETTERS: Letters as a Primary Source for Researchers and Serious Readers
>> See all our Reference books