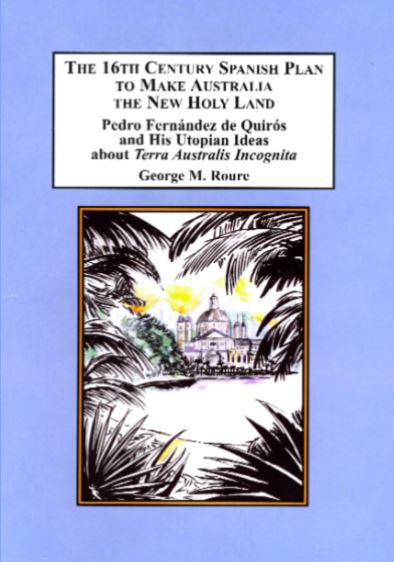 Work examines the Spanish Empire in the late 16th century and the plan to establish a "new holy land" at the antipodes. Centering on the utopian ideas of the time, this study details the motivations of Portuguese explorer Pedro Fernández de Quirós in this pursuit for the Spanish empire. Additionally, this work contains the first English translations of the important document titled "The Fortieth Memorial of Quirós to the King of Spain."

“This book offers a plausible explanation and interpretation of the possible motifs, contextualizing them firmly within the European Christian humanist tradition. It is, therefore, of special relevance to early modern scholars and students, as well as educated readers interested in the Pacific, history of discoveries and early modern colonialism.”
Dr. Mercedes Camino, Professor of European History, Lancaster University

Chapter 2: The Literary Trope of New Jerusalem from Columbus to Quiros

Chapter 3: Comparing the Expedition Instructions of Sarmiento and Quiros

Introduction to the 40th Memorial of Quiros

Appendix 1: Time line for the Eschatological Developments that Quiros Envisaged would take place in the Great Southern land in Association with the New Jerusalem

2000 - History of a New Zealand Pentecostal Movement the New Life Churches of New Zealand From 1946 to 1979
2010 - Study of Audience Responses to the Media Discourse About the “Other”: The Fear of Terrorism Between Australian Muslims and the Broader Community
2012 - Australian Universities Delivering Educational Programs in Other Countries: A Study of Off-Shore Higher Education
>> See all our Australia & New Zealand: All Subjects books