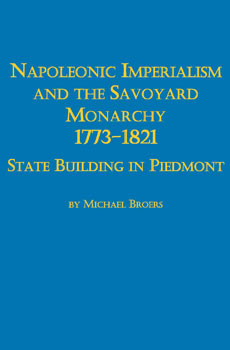 Winner of the Second Prize in the 1997 Competition of The International Napoleonic Society
Ancien régime Piedmont is a little-studied area, and so there exists a geographical and conceptual imbalance in the historiography of the Napoleonic era which this work addresses. It concentrates on the character and shape of mainstream political life in an area representative of the much of the territory controlled by the Napoleonic régime. It illustrates that the major problems of law and order and political polarization which beset the Revolutionary period did not disappear under Napoleon. They preoccupied his government as much as those of his predecessors. These problems, rather than ideological questions of national unity - were the chief concern of his Italian subjects, and so the question of law and order stands at the center of this work. Chapter headings include: the Absolutist Heritage; Crisis of the Ancien Régime; Patriots in Piedmontese Society; French Policy After Annexation; Resistance & Repression; Defence of Society; Resentment & Ralliement; Restoration & Reaction.

". . . this exemplary work focuses on the impact of the 'epoca francese' (French Revolution, Napoleonic, and post-Napoleonic periods) on the Piedmontese state. Broers provides a detailed examination of the main political, social and economic trends that prevailed from 1687 to 1848, as well as a perceptive interpretation of historiography." - Choice