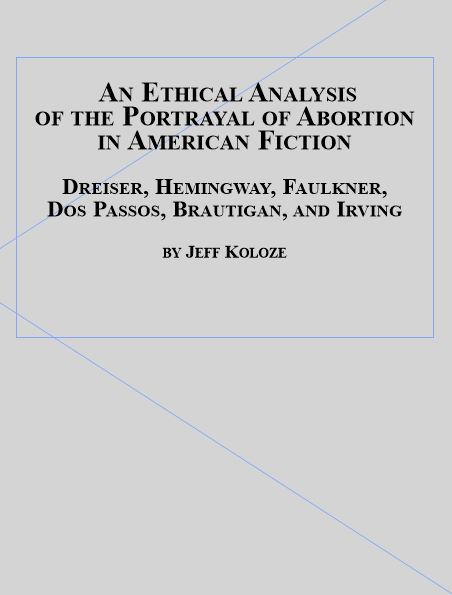 Religiously-based ethical aspects of the abortion issue have not been addressed in literary criticism; thus, determining the ethical content of twentieth-century American fiction concerning abortion will assist students of literature and those interested in this controversial issue. Specifically, the author identifies six ethical aspects of the abortion issue discussed in Judaism, Catholicism, and Protestantism. The first ethical aspect concerns the lex talionis passage in Exodus. Second, the concepts of “health” and “life” are considered. The study then examines whether the unborn child can be viewed as an aggressor against his or her mother. Determining whether the unborn child possesses “potential” or “actual” life constitutes the fourth ethical aspect, followed by the closely related categories of “formed” and “unformed” fetuses. The last ethical aspect concerns ensoulment. The study conducts close readings of abortion passages in canonical works by Dreiser, Hemingway, Dos Passos, Faulkner, Brautigan, and Irving. Incorporating biographical criticism and other tools of literary research, the author concludes that canonical works do not address these ethical aspects. Finally, the study addresses the six ethical aspects in other twentieth-century non-canonical works.

“The book that results from this original investigation is remarkable. The author takes up, dispassionately yet energetically, the key novels of Dreiser, Dos Passos, Hemingway, Faulkner, Brautigan and Irving. Then, in the final chapter he widens his reach to take in a vast sweep of post-Roe fiction touching on the moral and religious dimensions of abortion. Of course, literary engagement with abortion is very different from the pro and con of legal, philosophical and religious debate found in books and magazines ... Just as cases in law have their precedents, so literary works have their lineage, too. Most of this book deals with the early 20th-century forebears of the abortion fiction of the last thirty years ... In most of these tales, as the author demonstrates, the religious element is sketched in only lightly but it is there all the same, unmistakably present as the setting or backdrop ... Such rhetoric frankly invites the kind of investigation undertaken in this work.… Perhaps it is the absence of enduring love for a woman–the kind of love Yeats writes about when he says, “one man loved the pilgrim soul in you, / And loved the sorrows of your changing face” – that creates the deeply painful void at the heart of this modern fiction about abortion.” – (from the Foreword) Anne Barbeau Gardiner, Professor Emerita, John Jay College, CUNY

“In this work, the author not only addresses an important topic rarely treated in contemporary scholarship but synthesizes ethical and religious perspectives with the tools of literary scholarship. Despite the frequency with which abortions turns up in the major works of American fiction ... literary scholars have seldom thematized its role in their studies. The author’s work not only analyzes the most well-known writers with great sophistication but chronicles the development of this theme and its permutations in a host of lesser-known authors ... The scholarly importance of this volume resides specifically in the typology of approaches that he creates to classify the various ethical stances toward abortion that he has found in twentieth-century American fiction.” – Joseph W. Koterski, Chair, Philosophy Department, Fordham University

“History demonstrates that literary works can significantly influence societal behavior ... This analysis of the treatment of the highly controversial subject of elective abortion in twentieth-century American fiction offers valuable insights that will profit philosophers, theologians, and social scientists, as well as scholars in the communication field ... This thought-provoking analysis of the treatment of abortion in American literature invites further study ... It would be fascinating, for example, to learn from social scientists how influential literature and other media are in molding public opinion regarding the ethics of abortion ...” – Jane Gilroy, Associate Professor, Department of English, Molloy College, Rockville Centre, NY