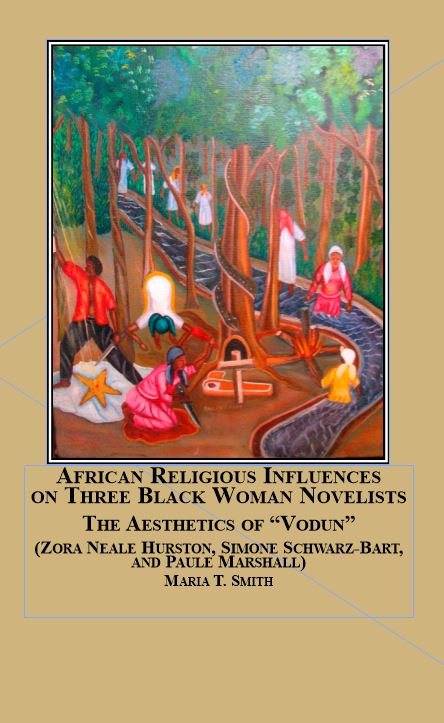 This study, focusing on select novels by women writers of the African Diaspora, illustrates that a surprising degree of commonality exists among works with obvious geographical, cultural, and linguistics differences – an affirmation of the philosophical essence of the Vodun religion as an antidote to Western spiritual and cultural moribundity. A close reading Zora Neale Hurston’s Their Eyes Were Watching God, Simone Schwarz-Bart’s Pluie et Vent sur Telumée Miracle, and Paule Marshall’s Praisesong for the Widow, demonstrates the way in which these works allude to the Vodun pantheon and ancestor veneration in order to valorize a worldview that recognizes the interconnectedness of all living things, visible and invisible. This is accomplished by locating each novel within its socio-political context and developing African diasporic literary tradition wherein African-derived beliefs have become sources of cultural resistance. After this reconstruction, the author is able to explicate the representation and function of Vodun as it is employed by each of the authors under consideration.

“In her engrossing new representation of three major transnational texts based on Vodun, Dr. Maria Smith opens a new field of critical inquiry, and she does so with assurance and flair. Her study offers a startling but completely persuasive reading of the significance of African religious elements in the works of three exemplary writers. Covering the Caribbean and the American south, Dr. Smith skillfully employs close reading, post-colonial, anthropological, theological, and literary theory, and convincing analyses of trans-Atlantic forms of ritual and vernacular culture ... Orchestrating all these new perspectives expertly, Dr. Maria Smith brings her work to closure by recognizing Diasporan life as a battle, full of disruptions, physical and psychic, which require drastic solutions, especially as the threatening tide of consumerism, alienation, and postmodern forms of “zombification” lap against the centuries of Africa-drenched traditions. As such, this book offers an antidote, but also a warning, one we ignore at our peril.” – (from the Foreword) Professor John Lowe, Louisiana State University

“Dr. Smith’s analysis of the Vodun aesthetic in key twentieth-century novels by Black women writers is revelatory. It is a refreshing and insightful interpretation ... in a highly readable and clear manner. Any attempt to illuminate the African experience in the Americas cannot ignore the role of the Vodun aesthetic in its power to heal, to transform, and to give voice to all that has come before this moment. Dr. Smith has shown us a path to this discovery through the work of some amazing writers.” – Professor Carolyn V. Prorok, Slippery Rock University of Pennsylvania

“This study provides very thorough and engaging readings of three novels that the author argues embody a shared aesthetic descending from the world-view of neo-African religion. While the general point that African-American and Afro-Caribbean writing frequently reflect cultural perspectives with origins in Africa is fully accepted by scholars of African-American and Afro-Caribbean literature in English, rarely has the connection been drawn so specifically and interestingly as in this study.” – Professor Joseph T. Skerrett, Jr., University of Massachusetts - Amherst