Comprehensive Index to Artist and Influence, the Journal of Black American Cultural History, 1981-1999 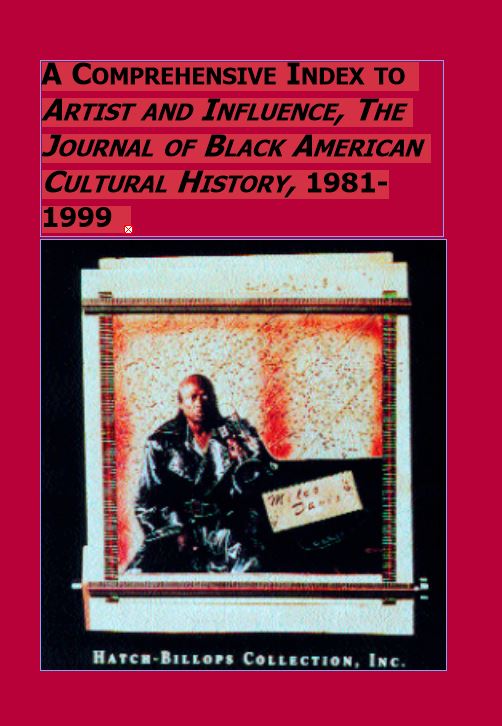 Artist and Influence is an annual journal published by the Hatch-Billops Collection in New York. Among other materials, Hatch-Billops houses an archival collection of oral histories of African American and some Asian and Hispanic artists from all fields of the performing, graphic, and spatial arts.

Interviews with Black and Asian filmmakers, actors, musicians, sculptors, photographers, animators, choreographers, singers, and painters, provide new information about the role of minority groups in the development of the American arts. Many of the figures whose words are transcribed were elderly when they were interviewed. Their perceptions shed new light on movements such as the Harlem Renaissance, the role of Black musicians during the Depression, or the resistance of Hollywood filmmakers during the 1930s and 40s to using Black actors and actresses.

This book offers a comprehensive index to material in journal articles and points the way to hitherto unavailable information.

“The editors have chosen a project that is of paramount importance to scholars, and the researchers’ whole focus is primarily on African American artists and their influence on society. The Hatch-Billops Collection, founded a quarter of a century ago, serves as a repository for relevant and useful information that appears to be rare and unique in its offerings. There was certainly a need for the indexing of this Journal, which contains nineteen volumes.” – Professor William Rogers, Hampton University