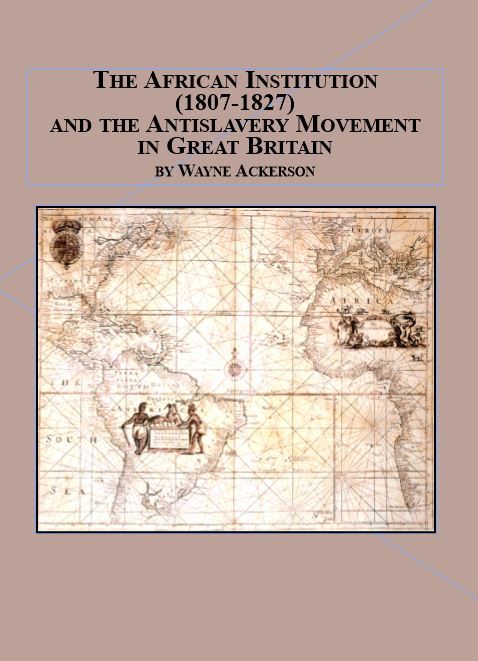 The African Institution was a pivotal abolitionist and antislavery group in Britain during the early nineteenth century, and its members included royalty, prominent lawyers, Members of Parliament, and noted reformers such as William Wilberforce, Thomas Clarkson, and Zachary Macaulay. Focusing on the spread of Western civilization to Africa, the abolition of the foreign slave trade, and improving the lives of slaves in British colonies, the group's influence extended far into Britain's diplomatic relations in addition to the government's domestic affairs. The African Institution carried the torch for antislavery reform for twenty years and paved the way for later humanitarian efforts in Great Britain. This book is the only monograph on the African Institution, and thus the only specific book length analysis of its successes and failures. The 20-year period of its existence was a crucial transitional period for the antislavery movement, and the book adds to a relatively sparse body of research on that particular time period.

“Wayne Ackerson's study of the African Institution is both welcome and timely ... This book appears at a time when historians of American abolitionism are reexamining the period before 1831 and the Institution, which existed from 1807 to 1827 ... This is an engaging, clearly written book that deserves the attention of scholars of British and American abolitionism and of the wide world of Atlantic slavery and antislavery.” – Professor Ronald Walters, Johns Hopkins University

“Dr. Ackerson's book examines a significant episode in the history of the international movement to abolish slavery. It concerns the African Institution, a group formed in England following the 1807 law that abolished the slave trade. Using the group's annual reports and correspondence from its leaders, Ackerson reconstructs the history of efforts to capitalize on their first success ... Professor Ackerson's narrative will be of interest to scholars of slavery and its abolition. It also provides a case study of organized protest in the period just prior to the introduction of new means of communication that made mass movements possible. Finally, this account of the rise and fall of the African Institution's influence shows the problems faced by any reform movement that hopes to maintain its followers' enthusiasm following a partial victory.” – (from the Commendatory Preface) Professor James Jones, West Chester University

“Wayne Ackerson's book is the first in-depth study of the African Institution, and a valuable addition to the quite sizable literature on the British abolition movement of the late eighteenth and early nineteenth centuries ... To his credit, Ackerson does not inflate the overall success of the African Institution. Rather, through careful research and analysis he exposes the limitations of the organization ... In sum, Ackerson's book is well-written, free of modish jargon, and based on an impressive amount of research that adds to the force of his analysis. No doubt it will be the standard work on the African Institution for some time to come.” – Professor William Barnhart, Caldwell College