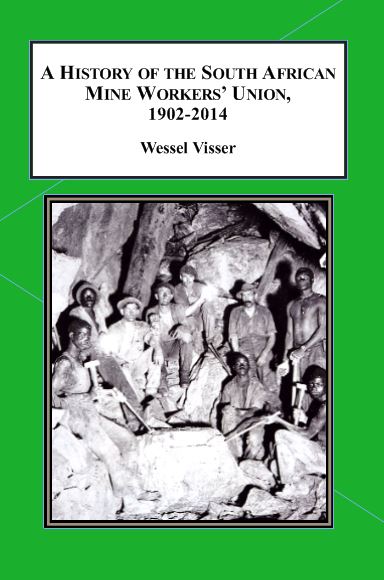 “There has not been anything resembling a consolidated history of the MWU/ Solidarity over its one hundred year history…This text can be described as a well-contextualized, institutional history of the Mine Workers Union established in 1902…with particular focus on its leadership…This work covers a lengthy span of historical time up to the present.”
-Dr. Paul Stewart,
University of the Witwatersrand, Johannesburg

“This is the first substantial historiographical analysis of one of South Africa’s most significant and oldest trade unions…The analysis is based on impressive archival work, as well as interviews with prominent role players…The study shows how the MWU (and subsequent Solidarity) has impacted history…”
-Associate Professor Andries Bezuidenhout,
University of the Witwatersrand, Johannesburg

Foreword
Preface
Acknowledgements
Introduction
Chapter 1: Militant beginnings.
The birth of a miners’ union in the era of industrial strife 1902-1929
Introduction
The founding of the Transvaal Miners’ Association
The Afrikanerisation of the union
The miners’ strike of 1907
The miners’ strike of 1913
The general strike of 1914
The volcano erupts. The Rand Revolt of 1922 and its aftermath
Chapter 2: Political forces at play
The struggle for executive control of the MWU 1929-1948
Introduction
The Harris administration and the Afrikanerbond van Mynwerkers
The Reformers’ organization and commissions of enquiry into the affairs of the MWU
The politicization of the struggle for executive control of the union
The elections of 1948 and the double NP victory
Chapter 3: From the Ellis administration to the Time of Troubles.
The MWU in symbiosis with the National Party government, 1948-1977
Introduction
Renewed irregularities. Albert Hertzog and the Hoek Commission of Enquiry
A bombshell is dropped. The 1951 Judicial Commission of Enquiry
The Visser-Ellis lawsuit and its aftermath
The Times of Troubles. The monthly wage experiment and its consequences for the MWU
Arrie Paulus and the re-stablisation of the MWU
Chapter 4: The Wiehahn Commission of Inquiry and a shift to the hard-right, 1977-1987.
Introduction
Prologue to confrontation. The ramifications of the Wiehahn commission of Inquiry into labour legislation
The miners’ strike of 1979 and its implications for the MWU
Right-wing reaction to the Wiehahn report. The MWU turns to industrial and political consolidation
Chapter 5: Adapt or Die. Transforming the MWU to Solidarity, 1987-2014.
Introduction
Defending the laager. Failed efforts towards white ring-wing labour and political realignment
Flip Buys and the transformation to Solidarity
Solidarity in the new millennium
Conclusion
Appendix
Bibliography
Index

2003 - Sociological Inquiry Into the History of the Union of Turkish Chambers of Engineers and Architects
1993 - Catholicism and the San Francisco Labor Movement, 1896-1921
2015 - Work-Famly Debate in Popular Culture: Can Women and Men Have It All?
>> See all our Labor Studies books