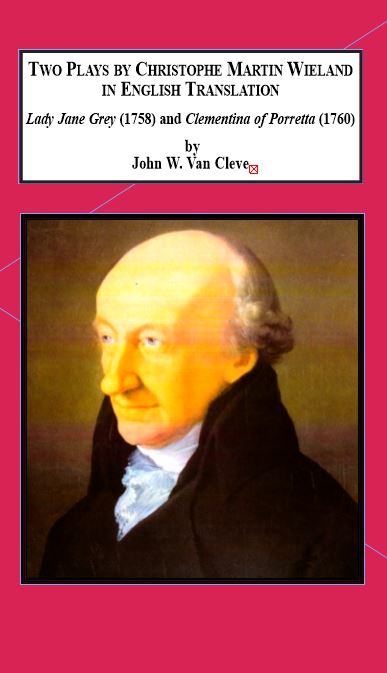 Along with G.E. Lessing, and the famous pair, Goethe and Schiller, Christoph Martin Wieland (1733-1813) is a member of the pantheon of German eighteenth-century writers. The plays of Wieland's youth have not appeared in English translation until now.

"Young Wieland matriculated at the University of Tubingen to study law, but he was soon attracted attention with lyric poetry that tended toward the metaphysical. The plays of his twenties, Lady Jane Grey (1758) and Clementina of Porretta (1760), do frequently air religious and ethical pronouncements . But they also evince artistic maturation by reflecting their author's growing interest in the interpersonal dynamics at play in politics, family relationships and love. The earlier drama is based on the last year in the life of England's 'Nine-Day Queen' Jane Grey's loftiness of mind and faith is tested by a national politics that quickly falls victim to 'Bloody Queen Mary.' English literature supplies the themes for Clementina of Porretta, who title character was created by the novelist Samuel Richardson. Wieland's Italian Countess Clementina must reject as a suitor the virtuous ever flawless English Knight Grandison, who she deeply admires and lives because as a Devout Catholic, she cannot accept his Anglican faith."

"While English history provided Wieland with rich material for Lady Jane Grey, it was contemporary English literature that supplied him with the second tragic heroine. The writer makes the debt clear in his play's title, Clementina of Porretta, A Drama Drawn from Richardson History of Charles Grandison. Wieland's determination not to just mine English literature for material but to extend familiarity with the tradition throughout the German speaking world led to his translation of 22 Shakespeare plays, which filled 8 volumes (1752-1766). Weiland founded The German Mercury (Der deutsche Merkuur) in 1773. It soon became the most important literary review in Central Europe.

Other Performing Arts and Drama Books

2012 - How Timberlake Wertenbaker Constructs New Forms of Gender in Her History Plays
2004 - Crypto- Judaism, Madness and the Female Quixote. Charlotte Lennox as Marrana in Mid-Eighteenth Century England
2022 - A Performance Guide to Verdi's Art Songs with a Performance CD
>> See all our Performing Arts and Drama books

2022 - Two Tragedies by F.M. Klinger in English Translation: A Suffering Woman and A Second Arria
2022 - The Voyage of an Earth Inhabitant to mars (1790)- hard cover
2020 - Julius of Taranto by J.A. Leisewitz and The Twins by F.M. Klinger: Two Tragedies of the German Sturm und Drang Theater
2019 - Country Pastors by J.C. Kruger and Good Women Triumphant by J.E. Schlegel: Two Comedies of the Early Enlightenment
2017 - Palisades Island: A Translation of Insel Felsenburg by J.G. Schnabel
2013 - Fables and Tales by the German Aesop, C.f. Gellert (1715-1769): A Moral Teacher of the German Nation