The Hispanicization of the United States: The Latino Challenge to American Culture 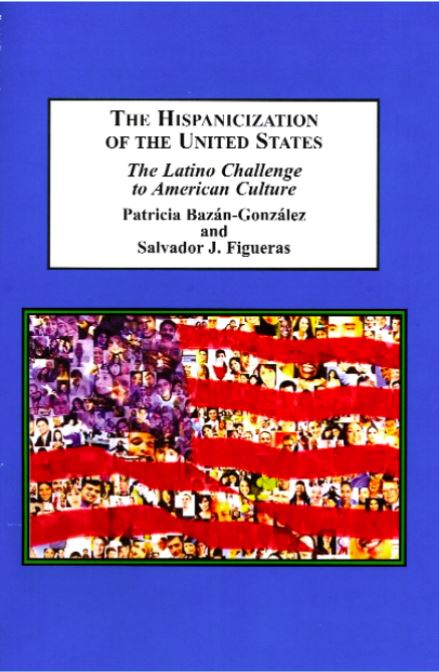 The transformation and reincarnation of culture is underway in the United States and has been ongoing for hundreds of years. England and Spain each played prominent roles in influencing the historical “founding” of what America has become for nearly five centuries. This study emerges as a leading identifier of the many historical and ingrained social nuances this hybrid culture – Hispanicity – employs as it continues to modify and challenge every cultural aspect of modern society in the United States.

“The discussion of Spanglish as a sociopolitical tool is important in establishing the authors’ interpretation of “Hispanicity” as expressive of commonality and solidarity in the Latina/o experience in the United States…This study is rich in its detail and synthesis…readable and enlightening.”
-Professor Tony Acevedo,
Hudson County Community College

“An intriguing examination of how “Hispanicity,” has impacted all facets of the American way of life. This narrative finds its place in the historiography of American history, Latin-American history and to a greater extent Western civilization post 17th Century. The narrative is truly interdisciplinary and can easily be accommodated into other academic fields such as sociology, American literature, anthropology, ethnographic studies and historical linguistics.”
-Professor Dorothy Anderson,
Hudson County Community College

Hispanicity: A New Chapter in the History of Spain
• The Culture of Spain and the New World
• 1492 as a Key Year to Understand Hispanicity
• The lingua franca of a Reconquered Iberia
• Religious hegemony and the Edicts of Expulsion
• Cultural uniformity in Spain
• The Culture of Spain in the Americas
• The rebellious criollos: Bolívar, Martí, San Martín
• Anglo-America and Spain in the United States
• The evolution of the term “Hispanic”
• Coming full circle: The USA beyond the 21st Century
Chapter One: History: Lessons One Can’t Ignore
• The Spanish explorers in North America
• Alvar Núñez Cabeza de Vaca: the first americano
• The Spanish Settlements in North America
• The Native Americans and Spaniards
• Anglo-centrism
• The Term “Columbia”
• The Case of Benjamin Franklyn
• The Spanish Cession (1819)
• The Republic of Texas (1836-1845)
• The Mexican-American War (1846-1848)
• The Gadsden Purchase (1853)
• The Spanish-American War (1898)
• Ignoring the Other
Chapter Two: Spanish, A Language That Reinvents Itself
• Spanish and Latin Vulgaris
• Influence of Arabic on Castilian
• The Amerindian languages on Castilian
• Cross-Pollination between English and Spanish
• Language As a Political Tool
• Spanglish as the Greater Equalizer
• The Future of Spanglish
• The Impact of Regional Spanish
• The Unfinished Journey of the Spanish Language
Chapter Three: The QuixoticPersonality
• Quixotic vs Quijotesco
• Miguel Cervantes and the Hispanic Identity (1605)
• Yoismo vs Compromise
• Modern Quijotes
• The Bilingual Mestizo: The Inca Garcilaso (1690)
• To Dream the Impossible Dream; Simón Bolívar’s Carta de Jamaica (1815)
• Nuestra América or Our Their America?: José Martí
Chapter Four: How Is the Segunda Conquista Taking Place
• The role of globalization and the corporate world
• Samuel Huntington and “The Hispanic Challenge”
• The United States; the largest Spanish-speaking nation in the XXI Century?
• Hispanicity: the product of post-colonial America
Conclusion

2000 - American Virtues and Cultural Values From the 1820’s to 1990’s- Virtuous Materialism
2020 - The Hispanicization of the United States: The Latino Challenge to American Culture (NYRB Softcover price)
2002 - America’s First Veterans and the Revolutionary War Pensions
>> See all our American Studies books

2020 - The Hispanicization of the United States: The Latino Challenge to American Culture (NYRB Softcover price)