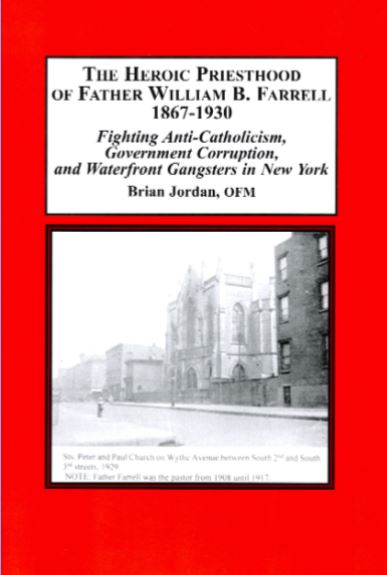 This previously unknown New York City Roman Catholic priest of the early 20th century is introduced to scholars of religion, labor and social justice causes. His work as a pastor in Brooklyn and in Williamsburg is only part of his biography. Fr. Farrell stood up to the social and political issues of his time: anti-Catholic bigotry, labor rights, organized crime and corruption in the New York City government. This book contains 7 black and white photos.

"Now Father Jordan offers us a riveting book which vividly resurrects the voices of a lost New York from over a century ago. It was a time, increasingly forgotten, of explosive growth and changes: struggles for economic equality, social justice and human dignity, and full throated, bare knuckled labor and political battles, which, Father Jordan's research and retelling remind us, resonate deeply with the challenges America faces today." Professor Nicholas W. Allard, Brooklyn Law School

"... It sheds light on a priest who contributed much to his communities. Fr. Farrell's story intersects with many important moments in New York history (labor disputes, Prohibition, The Great Depression, massive immigration.) His pamphlets gave voice to many who labored under poor conditions. This book champions as advocate for peace and social justice. His story, as told by Fr. Brian, is timely and relevant for our story today." Dr. Ian Maloney, St. Francis College

Chapter 2: Early Years as Pastor of Sts. Peter and Paul

Chapter 5: A Challenge to the Privacy Law of New York State: The Tides Turn Against Mayor Mitchell

Chapter 6: From Williamsburg to Brooklyn Heights