THE STORY OF THE ENCOUNTER BETWEEN MONK BAHĪRA AND MUHAMMAD AS IT IS RECORDED IN THE SYRIAC MANUSCRIPT OF MARDIN 259/2: The Monk Encounters the Prophet 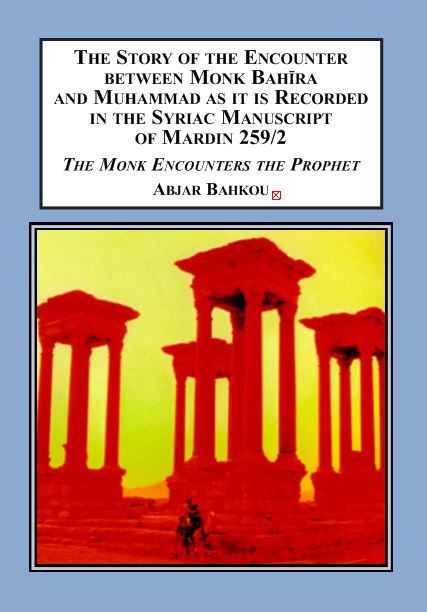 This valuable work an exceptional guide to our understanding of Islamic origins and early Islamic-Christian relations. Few scholars have the expertise to translate the relevant texts contributing to this material. Dr. Bahkou’s analysis and commentary is impeccably acute in broadening our understanding of where the long oral traditions of this story correspond with the written evidence found in the Syriac Manuscript. This is a clearly articulated and masterful piece of research.

“This is not a book about Islam extremism, but rather Dr. Bahkou provides us in a matter of fact way with the backstory for how many Muslims have historically viewed Christians, and also, in turn, how Christians of a different era and somewhat different political situation, responded to the challenges Islam posed.”
-Professor Joel C. Elowsky,
Director of the Center for the Study of Early Christian Text,
Concordia Seminary, St. Louis, MO

“The book brings to light an unknown Syriac manuscript about a controversial figure, known to have played a crucial role for the beginning of Islam. Islamic tradition sees in this figure, Monk Bahira, a witness to the truth of Islam. The Christians, on the other hand, sees in this Mon a “Christian heretic” who taught Muhammad his versions of the true religion. Compared to the significance of the story, little scholarship has been written about it. Any further aspect of the study of Monk Bahira would contribute to the enrichment of its scholarship. Thus, this scholarly work, that lasted for many years is welcomed!”
-Professor Abdul Massih Saadi,
Associate Professor of Arabic and Modern Foreign Languages,
Baylor University

Foreword by Joel C. Elowsky
General Introduction
Chapter 1: Commentary on the Text
-Early eastern Christian Reactions to Islam
-The Main purpose of the Story
-Date and Authorship of the Text
-The Christian Story
-Bahīra the Enemy of the Cross
-The Apocalypse of Bahīra
-The Contents of the Encounter
-The Polemical and Religious Context of Bahīra
-The Mardin Manuscript
-Conclusion
Chapter 2: The Syriac Text
English Translation
Bibliography

2016 - Limits of Democracy and the Post-colonial Nation State: Mali’s Democratic Experiment Falters, While Jihad and Terrorism Grow in the Sahara
2014 - The Figure of Samson in Jewish, Christian, and Islamic Traditions: The Myth and the Man
2015 - Criminology and Penology in Islamic Jurisprudence
>> See all our Islamic Studies books