THE PORTRAYAL OF SOCIAL CATASTROPHE IN THE GERMAN-LANGUAGE FILMS OF AUSTRIAN FILMMAKER MICHAEL HANEKE (1942- ): An Examination of The Seventh Continent (1989), Benny’s Video (1992), 71 Fragments of a Chronology of Chance 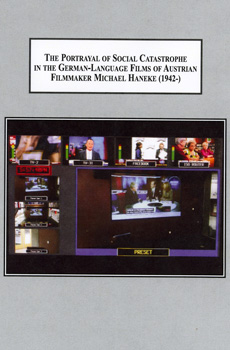 Second Place Winner in the Arizona Author's Association 2011 Published Nonfiction Book Award Contest
Since 1989, Austrian filmmaker Michael Haneke has earned the reputation of one of the most provocative and subversive auteurs in contemporary European art cinema. The focus of this book is Haneke's first four German-language films that represent a radical director's attempt to locate the root causes of a pervasive moral and psychological deterioration that has characterized Western culture since the latter stages of the twentieth century. Calling upon multiple theoretical approaches, this book entails a close-reading examination of Haneke's following works: The Seventh Continent (1989), Benny's Video (1992), 71 Fragments of a Chronology of Chance (1994), and Funny Games (1997). These films have been selected for analysis because they encompass the major themes and philosophical concerns threading throughout Haneke's oeuvre: a nightmare vision of the First World teetering on the brink of catastrophe while awash in the excesses of advanced capitalism, obsessive consumerism, and media and technological dominance. This is not activist filmmaking in the sense of evoking change, but instead a radical cinema propelled by Haneke's aggressive methods of cultural vivisection. The book's target audiences are film scholars, graduate students in the fields of cinema analysis and critical studies, and art-cinema aficionados.

"[The author] so thoughtfully dissects in this book. Though it is precisely the notion of an origin—a moment in time, space, and narrative that founds something and thereby acts as an anchor of meaning—that Haneke is, in part, ques-tioning in his films, [the author] is wise to turn to this period in Haneke in order to find a vantage point from which we might begin to discern the philosophical commitments that drive the director’s art." -- Prof. H. Peter Steeves, DePaul University

"[The author]'s insightful study of Haneke's cinematographic semiotic codes points to crucial issues of modern consciousness, such as the communicative breakdown of postmodern exchange, the alienation of the self in a spectacularized reality, and the deep epistemological crisis that challenges the very foundations of a post capitalistic order. ... [The author]'s books responds to a very present need in our field for it addresses fundamental questions raised by the works of an important film maker in a clear, conceptually informed manner served up in an engaging and convincing style, making it both a pleasant and highly informative read." -- Prof. Daniel Ferreras Savoye, West Virginia University

Chapter 3: 71 Fragments of a Chronology of Chance: The Culture of Emotional Paralysis

Chapter 4: Funny Games: Spectator Culpability and the Unraveling of the Moral Code

Conclusion: A Cinema of Consequences