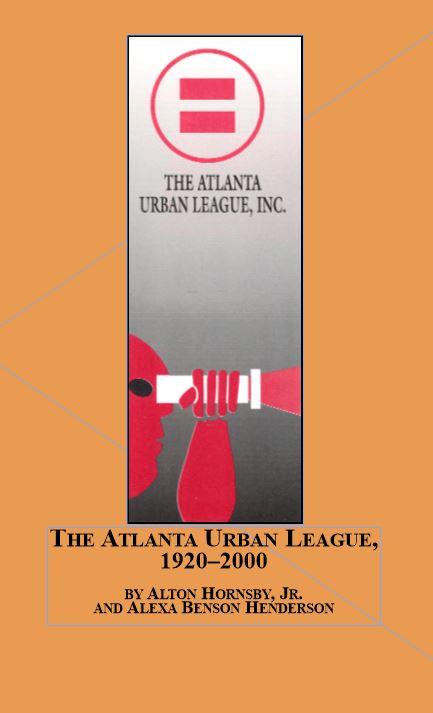 This study traces the history of the Atlanta Urban League, a major southern affiliate of the National Urban League, from its founding in 1920 to the end of the 20th century. It shows how the Atlanta Urban League adhered to the primary functions of the national Urban League Movement by studying and planning solutions to community problems and, where possible, to offer preventative measures to deal with them before they became acute. But the study also demonstrates several unique features of the Atlanta Urban League, including the production of scholarly monographs on educational, housing and health needs for African Americans in Atlanta that resulted in reforms in the Atlanta Public Schools; increased and improved housing for blacks; and a private hospital for middle and upper income black Atlantans. Notably, the Atlanta Urban League had one of the first female executives of an Urban League affiliate and was one of the first affiliates to face possible disaffiliation for seeming to gear some of its policies to appease segregationists in order to receive local funding. The work is a major contribution to the growing literature on African American parallel institutions that permitted blacks to survive and progress as well as demonstrate independent action and leadership in the Jim Crow South.

“By the turn of the twentieth century, black and white urban reformers were in agreement that a social crisis was imminent in urban northern America unless the social and economic conditions of a rapidly expanding black population were addressed. Their concerns led to the creation of the National League for the Protection of Colored Women and the Committee for Improving Industrial Conditions of Negroes in New York City. The two organizations merged in 1911 to form the National Urban League (NUL).

NUL leaders from the outset applied social work techniques to social and economic problems facing urban blacks. They saw scientific social work as a tool for improving the life chances of blacks migrating from the rural South to urban centers in the North. This idea caught fire. By 1918, some twenty-seven Urban League affiliates had been established, St. Louis being the southernmost city. Not until 1918 did the NUL attach strings to affiliation. A prerequisite for association was the incorporation into local Urban League constitutions those principles governing the NUL, a biracial board of directors or trustees and affiliates that begin their work with investigations of local black "living conditions." A requirement of a biracial board posed a problem for the Urban League Movement (ULM) in the South. The Atlanta Urban League (AUL) affiliated with the NUL in 1920.

Professors Alton Hornsby, Jr. and Alexa Benson Henderson's study fills a gap in our knowledge of the relationship between the NUL and the AUL, its oldest and most prominent southern affiliate. Fear of losing monetary support from the Atlanta Community Chest and of being accused of supporting integration necessarily led the AUL to maintain a "nonpolitical" posture and declare its independence of the NUL at times. But this study argues persuasively that the AUL consistently challenged the traditions and points of view which have restricted the employment and advancement of blacks, whether it was during the Pre- and Post World War II eras, the Civil Rights Revolution era or the Post-Civil Rights Era.

From its founding in 1920 to the end of the twentieth century, leaders of the AUL had an eye toward securing employment opportunities for blacks and providing social services, which would make their transition from rural to urban American easier. Indeed so, the AUL has been a barometer for other southern affiliates. Its successes in challenging traditions, which restricted employment opportunities and the advancement of blacks into the economic and social mainstream, made the work of other southern affiliates all the more straightforward. Perhaps no organization working on behalf of urban blacks has expressed the goals of the Urban League Movement (ULM) as well as the AUL: "The Atlanta Urban League is committed to an open society, one with equal avenues of opportunity to all citizens, Black and White. ..." – (from the Commendatory Preface) Jesse T. Moore, Jr., History Professor Emeritus, University of Rochester; and Author of A Search for Equality: The National Urban League, 1910-1961

“This is a significant study of one of Black Atlanta's and Black America's most important social institutions--the Atlanta Urban League, a major southern affiliate of the National Urban League. Although written by two historians, it also contributes to our understanding of social formations and social relations in the African American Community. From it, we learn important lessons on how African Americans, even while in the throes of a segregated society, developed parallel institutions to meet their economic needs as well as their needs in education, health, housing, and recreation. The Atlanta Urban League stood out among Urban League affiliates, for more than half a century, in producing qualitative and quantitative studies of black life in the city. Some of these resulted in important reforms in education and housing and resulted in one of the first major, private hospital for non-indigenous blacks in the South. The League was also a leader in gender equality, employing in the 1940s, Grace Towns Hamilton, as one of the first female executives of a national Urban League affiliate and, indeed, of a major black human rights organization. Scholars and students of African American Studies, generally, and of African American history, particularly, as well as economists, social work specialists, sociologists and political scientists will find this work extremely valuable. Furthermore, it is written in a style that should appeal to a popular audience.” – Delores P. Aldridge, PhD, ACSW, Grace Towns Hamilton Professor of Sociology and African-American Studies, Emory University, and former Associate Executive Director, The Tampa Florida Urban League

“This history of the Atlanta Urban League, the premiere southern affiliate of the National Urban League, provides a very valuable contribution to our further understanding of the growth and development of African American institutions, particularly in the Age of Jim Crow. It demonstrates anew how blacks used parallel, though segregated agencies, to improve their living conditions and to attempt to foster harmonious race relations in the urban South. This particular piece of social and political history also makes a significant contribution in detailing and analyzing how middle class blacks not only worked in the interests of the more disadvantaged members of their race to improve and reform education, health, housing and recreation and teach them to effectively use the ballot, but it shows, uniquely, how the upper strata worked in their own interests, securing, for example, a private black hospital and developing middle class neighborhoods. The Atlanta Urban League was also unique in employing one of the first female executives of a major black social service and civil rights organization. Scholars and students as well as a popular audience should find this work very useful and quite readable.” – Vernon Burton, University Distinguished Teacher/ Scholar, The University of Illinois

2001 - Biography of E. Azalia Smith Hackley (1867-1922), African-american Singer and Social Activist
2022 - The Effect of the Covid-19 Pandemic on HCBUs' Academic and Social Culture
1991 - Racism as a Factor in the 1989 Gubernatorial Election of Doug Wilder
>> See all our African-American books