NEW FORMS OF PALESTINIAN TERROR AGAINST ISRAEL: A Profile of the Al-Quds Intifada 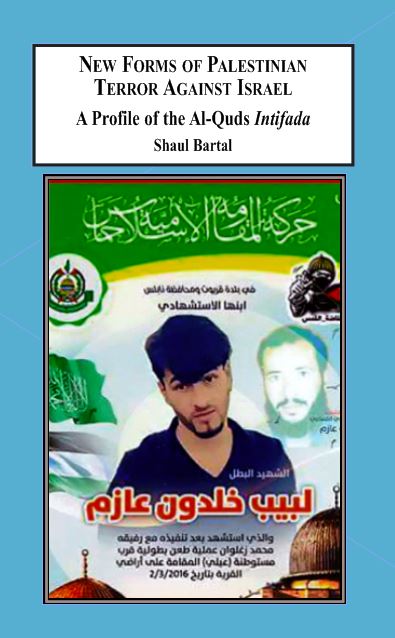 "Lone-wolf" attacks by terrorist organization members are not a new weapon in the terrorist arsenal in the history of the Israeli-Palestine conflict. Hamas and the PIJ have used the "lone-wolf" method during the the first intifada, especially between the years 1990-1992 after difficult demonstrations on the Temple Mount on October 8, 1990. There are books and articles published by Hamas and PIJ that clearly define this terror method not as a "lone-wold" or "leaderless resistance" attack but as an act carried out by a member of an organization who has the support and encouragement of his organization.

"Shaul Bartal's new book is brilliantly considered, crisply written, unsparing in its conclusions. The study of Palestinian lone-wolf fighters in Israel and the West Bank is an essential contribution to understanding the Palestinian factions especially Hamas and the Islamic Jihad and their use of the lone-wolf method in the Palestine-Israel conflict." Brig. General Shalom Harrai (res.), Senior Researcher in the International Institute for Counter-Terrorism of the Interdisciplinary Center (IDC)

The author's unique thesis is that the "lone-wolf" attacks, as nicknamed in the Israeli and worldwide press, are in reality, a continuation of the organized terror activities of the Palestinian liberation and terror organizations, especially the Islamic Jihad and Hamas." Dr. David Bukay, The University of Haifa

"The work presents a wholly new approach to the lone-wolf jihad attackers in the West and in Israel. ... Bartal has a lot of knowledge, acquired during his military service, about Palestinian society, their communications networks and their social media sites. Thereupon, this study builds on sources and analysis that are uncommon in other publications about the wave of terror of the last two years." Dr. Eliezer Tauber, Bar Ilan University

3. From Gaza to Jerusalem - A Connection of Escalation

5. The Palestinian Consenus in Jerusalem and the Race for the Voice of the Voters