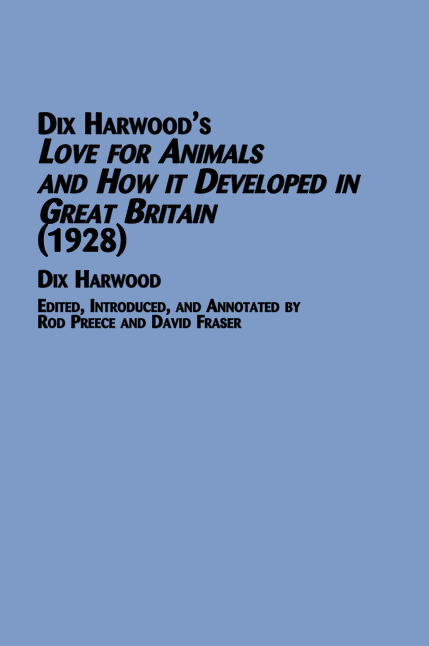 “Congratulations to Rod Preece, David Fraser and the Edwin Mellen Press for producing this new, annotated edition of Dix Harwood’s pioneering study. Privately published in New York in 1928, the first edition of Love for Animals was far ahead of its time, and consequently largely ignored by contemporary scholars. Although “rediscovered” by the Oxford historian, Keith Thomas, who acknowledges its important contribution to his own, much better known, Man and the Natural World (Thomas 1983), it remains still a relatively obscure and underutilized text. This is a great pity. Love for Animals is a work of rare scholarship that deserves pride of place among the other “classics” of anthrozoology. It should be required reading for anybody interested in the history of human-animal relationships, or the changing ways in which these relationships have been represented in Western literature.” – Journal of the Universities Federation for Animal Welfare
“Harwood’s book is in fact a paradigmatic example of a scholarly tour de force, juggling with incomparable dexterity history of ideas, political history, history of science, history of philosophy, cultural history, literary and artistic criticism, and whatever else is relevant to the matter at hand. Harwood clearly realized that tracking the development of moral concern for animals – ‘humanitarianism’ – is not a straightforward task like chronicling politics or even philosophy…. In addition to being an unending source for reflection on animal ethics in different eras, Harwood’s book abounds with timeless insights…. Harwood’s book is a majestic tapestry for the mind, both for its comprehensive array and for the stimulation one finds in a careful attention to its components…. His depth of thought and scholarship is matched by the beauty of his prose and the fecundity of his insights. Professors Preece and Fraser have done the field of animal ethics a major service by reissuing, and helpfully annotating, this major but neglected classic.” – Bernard E. Rollin, University Distinguished Professor, Colorado State University
“Even by today’s standard of scholarship, the range of themes covered was still challengingly wide and the materials presented impressively rich. The text itself was also written in a style suitable for a general readership. However, as a scholarly work published almost three quarters of a century ago, Love for Animals inevitably needs to be attuned to contemporary readers. In that respect, the new introduction to, annotation of, the work does a thorough and commendable job…. gives an essential clear outline of the unfolding or arguments in the work… a rich mine of sources for contemporary scholars dealing with most aspects of animal-human studies.” – Chien-hui Li, University of Cambridge