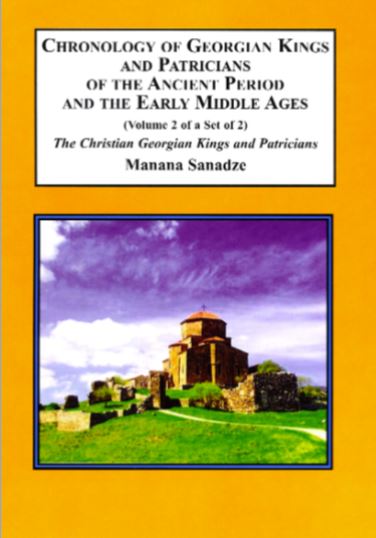 Establishes the chronology, sequence and descent of Georgian kings and erismtavaris. It is also important that the author identifies and determines numerous geographical place and toponyms.

Volume 2 continues by describing the historical period from the second half of the sixth century to the 780 A.D. Georgia was ruled by the Christian Sassanid dynasty, Persia-Byzantine, and the Perozian and Bakurian Dynasties.

"Dr. Manana Sanadze's research is particularly important in that it restores trust in the part of "The Georgian Chronicles" that is the main sources for the study of the ancient period and the Early Middle Ages in the history of Georgia. The scholar made it clear that "The Georgian Chronicles" offers the correct version of historical events, however the chronicle is characterized by the modernization of ethnic and geographic terms. There are some cases of chronological confusions was well as distortions of the text by copyist-editors of the later period, especially in the case of proper names. It is a great contribution that she 'cleaned' the text by eliminating such interventions made in the later period.
Professor Bezhan Khorava, The University of Georgia

Section III: The Chronology of the Christian Kings of Kartli

Chapter VIII: Settlement of Sassanids in Kartli - Rev, Mirian and His Successors up to 436

Chapter IX: Reinforcement of the Subordination of Kartli to Persia. Kings of Kartli: Archil I, Mirdat VIII, Vakhtang Gorgasal, King Archil I the Son of Trdat II

Chapter XI: Governors of the Part of Kartli with a Center in Tbilisi Gurgen and Juansher and Bivritiani Patricians of Kartli - Guaram I, Stepanos I, Adarnese, Stepanos II, Guaram II, Guaram the Child