The Great Reform of the Theatre in Europe: A Historical Study, by Braun and Justyna Kazimierz 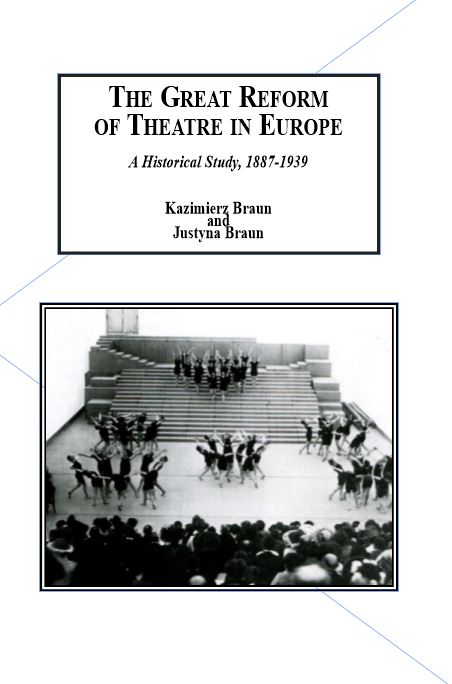 This book traces a movement in European theatre history known as the Great Reform of Theatre. This movement unfolded roughly between 1880 and the late 1930s. It developed against the background of dramatic political, technological, and cultural changes in the entire western world. The Reform transformed all facets of European theatre including play-writing, mise-en-scene, performance, production, criticism, and social significance.

"The authors of this new history on the development and reform of the arts of the theatre in Europe from the last decades of the nineteenth century through the outbreak of World War II discuss the profound changes occurring in the theatre world within the context of concurrent cultural, philosophical, and political forces, as well as from the perspective of narrower artistic questions of how theatre expresses the life of its times."
- Thomas Leff, MFA, Case Western Reserve University

"In keeping with its ambitions, the volume lies somewhere between the encyclopedic, with entries compiled in a roughly time-based chronology rather than alphabetically, and a narrative history.

The sense of encyclopedic stems largely from the way in which the authors have organized information as individual entries that gradually trace the European theatre's transition from the star-centered melodramas of the nineteenth century to one marked by the emergence of the director as a potent artistic force."
Dr. Ian Watson,
Rutgers University, Newark

Part 2: The Beginnings of the Great Reform

Part 3: The Founding Fathers of the Reform

Part 4: The Widening of the Reform

Part 5: Maturity of the Reform

Part 6: Conclusion of the Reform

1977 - Complaint of the Poet: The Parnassus Plays
2019 - An English Translation of Three Plays by Israeli Dramatist Edna Mazya: Games in the Backyard, The New Criminals, The Back Room
1996 - The Theater of Galdós: La Loca De La Casa (1893)
>> See all our Theater books