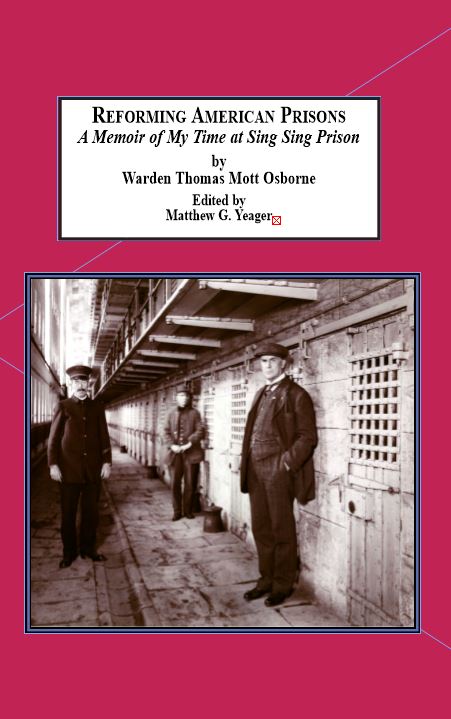 This book is Former Sing Sing Prison Warden Thomas Mott Osborne's story of his 2 year (1914-1916) tenure as Warden. This story has remained unpublished until it recent discovery among the Osborne papers at Syracuse University. Thomas Mott Osborne was a unique Warden of the Progressive era who instituted inmate self-governance as an alternative style of rehabilitation. It also chronicles his battles with the leaders of the New York correctional system that cost him his position in 1916. Thomas Mott Osborne's tale is a fascinating look into the American correctional system and points towards new ways of penal reformation. This book includes 3 black and white photos.

“… in this period of massive incarceration in North America, what happened to Warden Thomas Mott Osborne is quite telling. It suggests that the penitentiary system as originally designed cannot truly be reformed by well-meaning individuals within the correctional gulag. If change is to come, it will likely originate outside of corrections, by well-meaning groups, individuals, activists, ex-convicts, and of course, politicians who wish to take an interest in penal reform.”

"His reforms or rather the Mutual Welfare League are not something routinely in current punishment scholarship. It is generally assumed that rehabilitation or the late 19th century / 20th century era of penal reform was only openly aligned with the medical model and thus treating the offender as patient in need of expert help and intervention. This assumption, along with the data collection, was the bedrock of the development of a supposed 'prison science.' Osborne's approach has a departure from the medical model and other norms of prison administration. His approach to governance and dealings with offenders were a refreshing deviation from the traditional rehabilitative model."
Dr. Karol Lucken,
University of Central Florida

"The special value of the [book], in addition to the window it offers into prison history, is that very few prison wardens have the education or, frankly, the courage, to write about their lives and roles in the way that Mr. Osborne did. ... Therefore, this volume not only has historical significance in terms of understanding the prison system a century ago, it offers a rare look into the perennial nature of prisons and the impact it has on all those who live in them and work in them."
Elizabeth Gaynes,
Prisoners Right Attorney and Correction Professional

25. I Go Before the Grand Jury

2002 - Gypsy- American: An Ethnogeographic Study
2002 - Comparative Study of Societal Influences on Indigenous Slavery in Two Types of Societies in Africa 1600-1950
1985 - Religion and the Sociology of Knowledge. Modernization and Pluralism in Christian Thought and Structure
>> See all our Sociology books